Lorry Buses, called "Village vehicles" or "Street cars" by the locals, have a very rich history in Hong Kong. As its name, "village vehicles" shuttle between villages and town centers in New Territories.

But continuous urbanization in Hong Kong caused countryside areas became less and less. Aging problem is also serious among the population of most villages. Together with the reason of ever developing transportation system in Hong Kong, nowadays, most "village vehicle" routes have stopped service, either because of population decrease or lost in the competitions with other transport means, or because of retirement of the operators.

More information of Lorry Buses was revealed! Thanks to the uplift of closed area regulation at Ma Tso Lung and surrounding areas in June,2013! Being hidden inside the closed area for decades, everything near Ma Tso Lung are mystery to outsiders. One of the main newspaper in Hong Kong, The Apple Daily, published an article on this topic. The lorry bus route is also featured in the article. Some details of lorry bus operation were also revealed in the article. Later, another major newspaper, the Oriental Daily, interviewed the operator of FE8795, the lorry bus serving the Man Uk Pin route.

Both articles are available to view through the following links:

You can find more information of Lorry Buses in these 2 articles. Sorry, all articles were in Chinese language.

And, I need to clarify one thing here. It is above the statement "there were more than 180 "village vehicles" operating in Hong Kong during their heydays" listed above. The figure 180 was actually from the operator of ET8669, a.k.a. Mr. Ngau Kwu. I had a talk with him about a year ago in Aug-2012 and he gave me this figure. Whether the figure is true or not, I have no way to prove it. I just stated what I have heard.

Later, the same figure appeared on the "Encylopedia of Bus Transportation in Hong Kong 香港巴士大典". I can say someone simply copied information from my blog to there, including this figure. It is because I find the the wordings on that page is very similar to what I have written here. Actually, I do not mind being copied as I consider this as a kind of information sharing. However, is the figure 180 really reasonable? 180 is a large number at that time. Please do not forget we are only talking about lorry buses serving the rural areas, not all vehicles in the rural. I really doubt the reliability of this figure.

To make thing even worse, on 14-March-2012, an internet radio programme "HK Transport 還看香港公交" discussed about forgotten transportation. And the MC, Mr. Eric Lo, who is also the webmaster of Bus Enthusiasts page: 681 Bus Terminal, nearly quoted every single sentence of my article "The few remaining lorry buses in Hong Kong". Without asking my permission of using my artilce in advance, he did give me credits in his programme.

As a blogger, I really has no responsibility to make sure everything is correct before publish. Although I tried to provide information as correct as possible, here is only a blog. But as a wiki or a radio programme, should there be a higher expectation on the accuracy of information provided in it? And I again found the same figure in the Apple Daily article listed above.


Below, I would like to present you photos of 3 retired "village vehicles". These photos are the only one existing on the internet. They are all very precious. I hope you will like them. 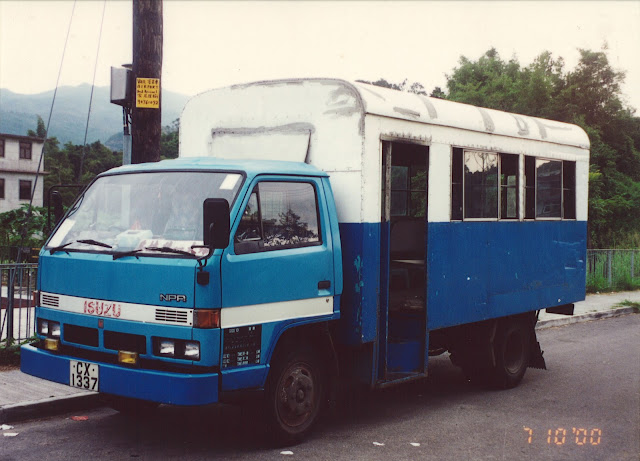 This is the first "village vehicle" photo taken by me. It was taken on 7-Oct-2000 in Wu Kau Tang.

This "village vehicle" was once, apart form taxi, the only public transport which connecting Wu Kau Tang and Bride's Pool to outside world. Because both places are famous spots for picnic, apart from villagers, this "village vehicle" also attracted hikers. When the business was good during holidays, the vehicle could be full. A number of hiking websites have mentioned this route, making it the most well-known "village vehicle" route to the public. Some people, including me, heard of "village vehicle" for the first time is because of this route.

Although this route was mentioned for more than once on the internet, photos were still very rare. After spending some efforts, I managed to find this photo from a abandoned photo album of a hiker. I hope you will have a better understanding to the operation of this route after seeing this photo: 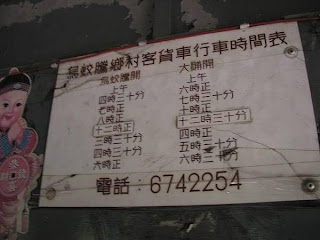 However, because of his age, the operator decided to give up this route in year 2003. This route was eventually replaced by additional journeys of minibus route 20C. Villagers and hikers can now enjoy a modernized means of transportation. But that was another lost to the history of Hong Kong.

Same situation also happened in Sai Kung and Ma On Shan. In the early days, there were "village vehicles" routes running between Sai Kung Town Center and Sai Wan Pavilion & between Heng On Estate and Ma On Shan Village. They were replaced by residential bus services NR29 & NR84 respectively.

Another vehicle went into history is this village vehicle EB2152, running between Fanling (Luen Wo Hui) and Man Uk Pin. This route was served by 3 "village vehicles" in 2009. But now, only one remained in service.

EB2152 was sold. Buyer is unknown. Special thanks to Andrew Chan to provide the following photos. 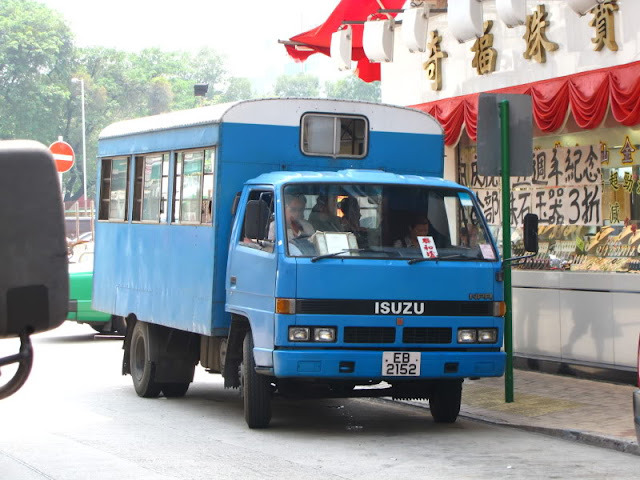 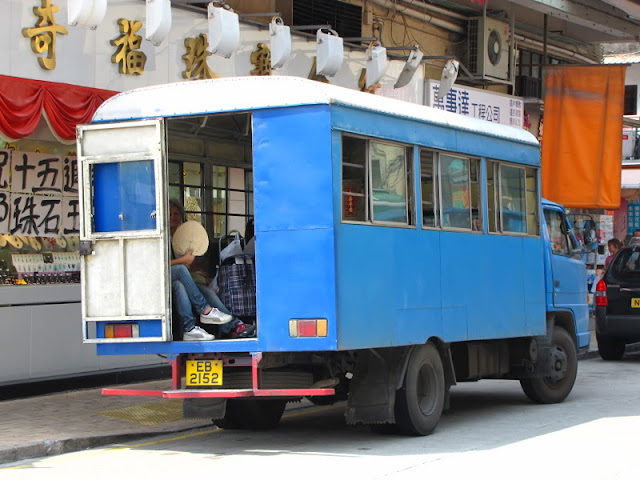 The other "village vehicle" still in operation is the route between Ma Tso Lung and Sheung Shui (Shek Wu Hui). 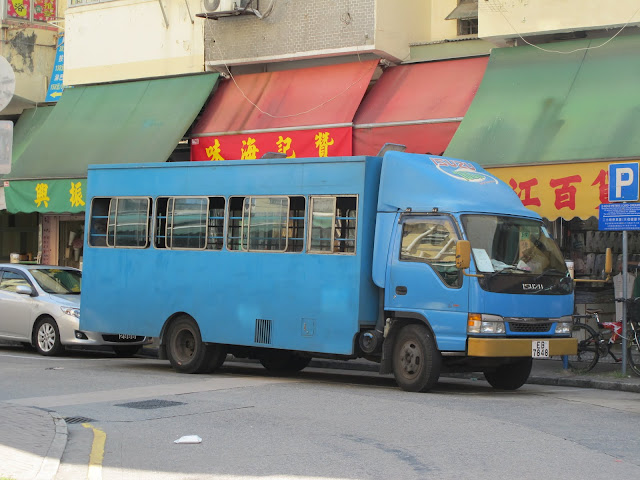 A total of 3 lorry buses used to be found on this route. EB7848 is one of them and also the newest. But very unfortunately, the operator, a.k.a. the driver, passed away on the summer of 2012. This lorry is forced to retire due to policy of Transport Department. As this vehicle became a part of history now, the following section was moved from the article "The few remaining lorry buses in Hong Kong" to here. 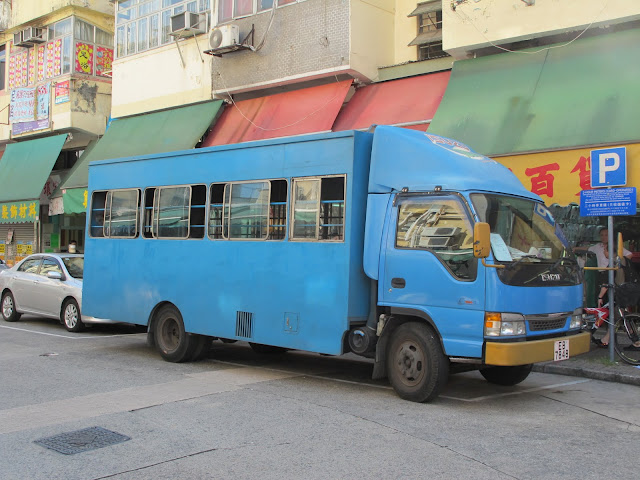 This lorry bus is converted from an Isuzu NPR lorry. 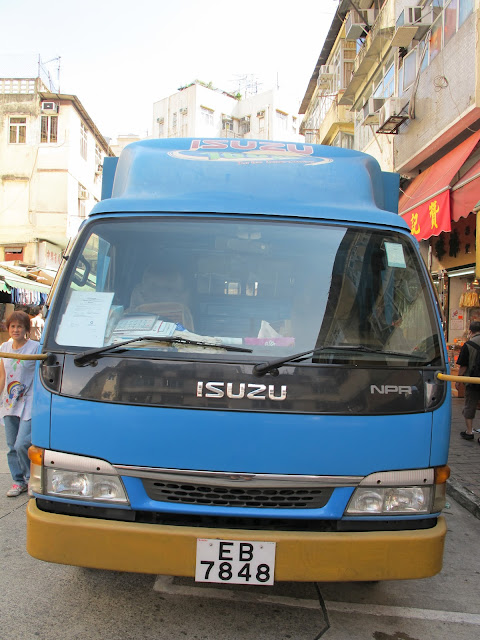 The front of EB7848 looks no difference from an ordinary lorry. 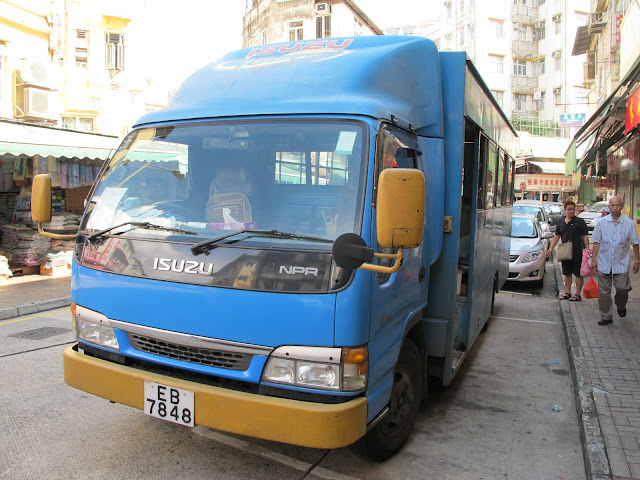 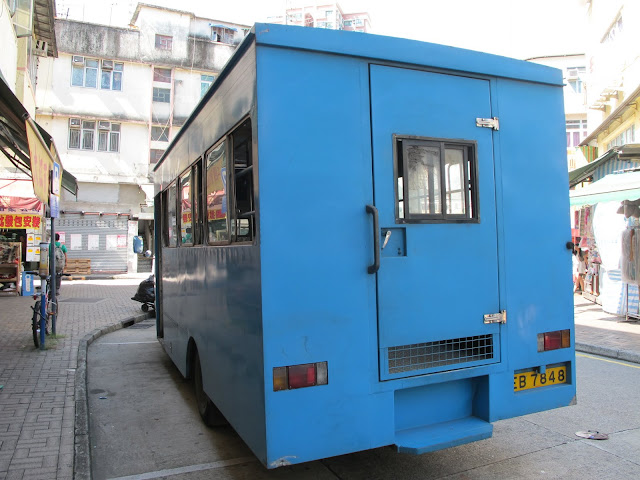 A backdoor can be seen at the rare of lorry bus. 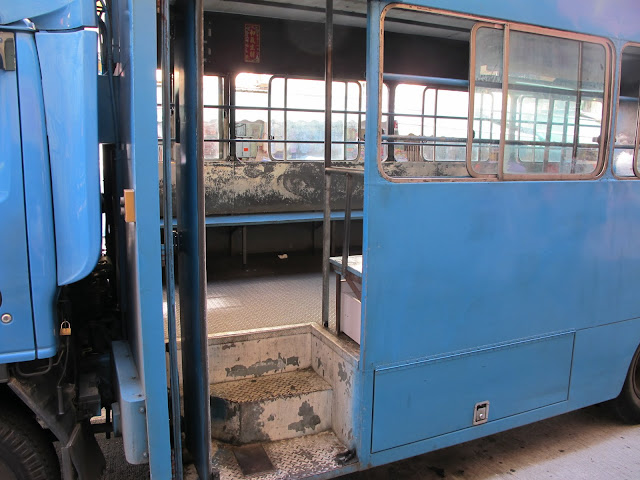 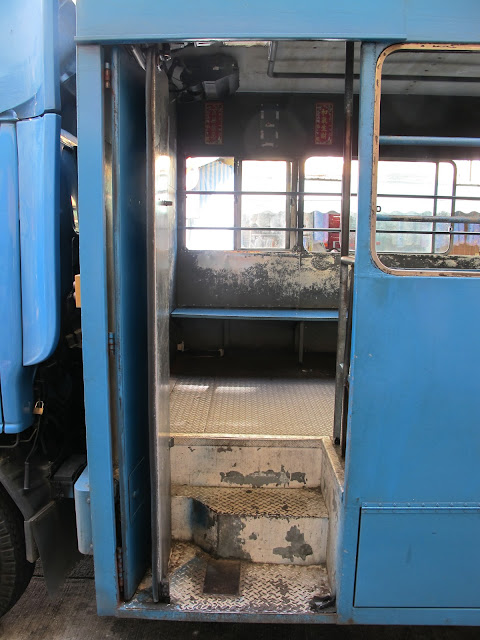 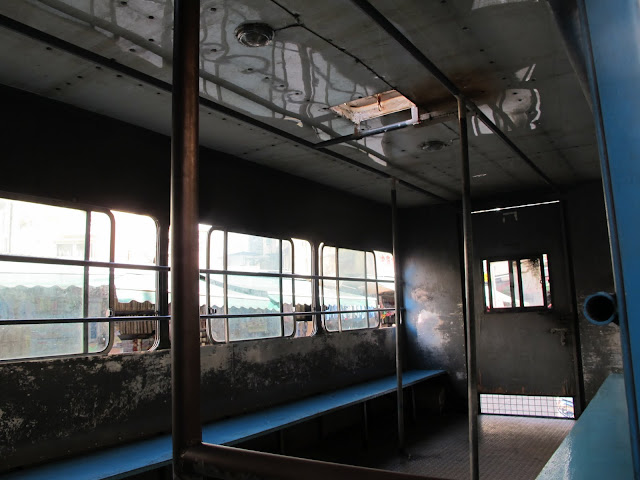 The interior looks gloomy even in the middle of the day. 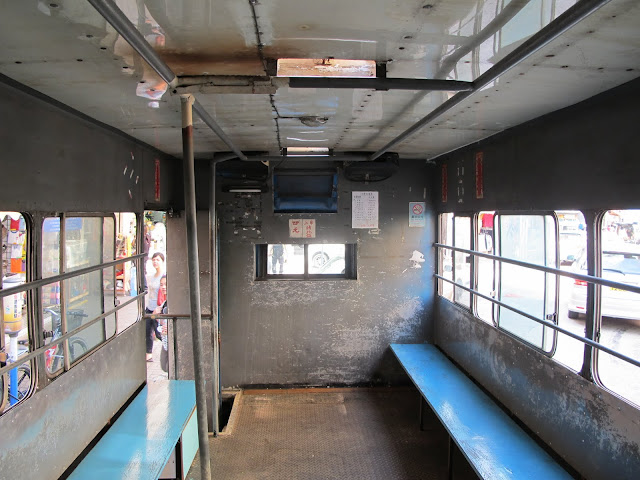 Lorry bus is fitted with longitudinal seating on both side. Both sides can sit about 10 passengers. 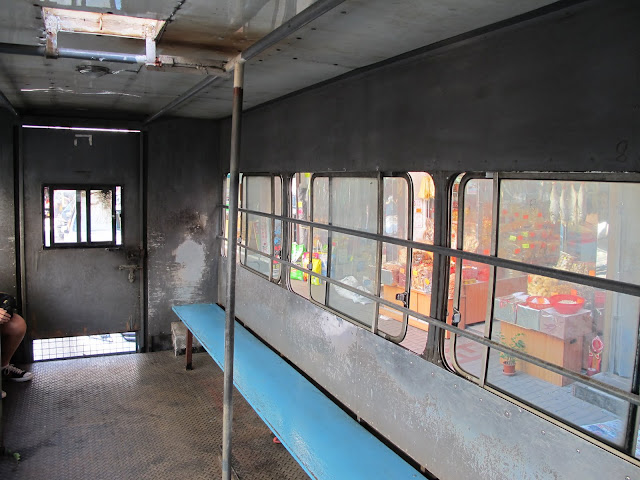 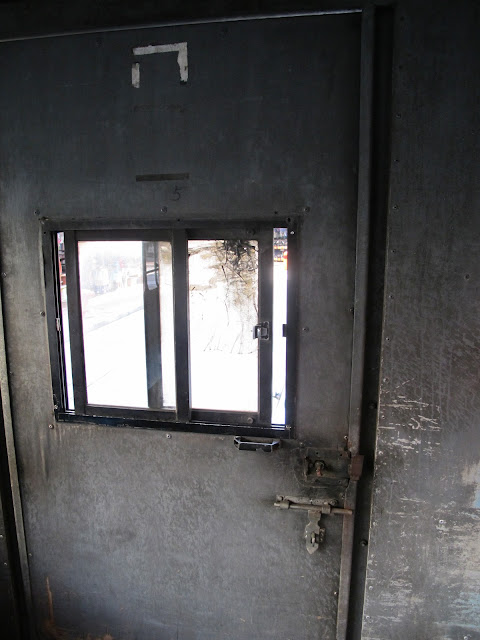 This is the backdoor. Doesn't it look like the door of a prison cell? 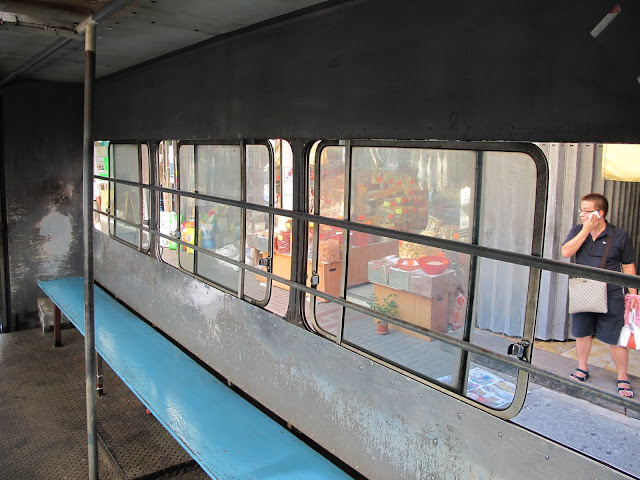 The man in the background is one of the Ma Tso Lung villager. I had a little talk with him. He thought I am a reporter and wanted me to generate a public awareness on "village vehicle" so that they can force the government to replace this type of outdated transportation.

I told him I am just a bus fans and the most I can do is to write something on my facebook. 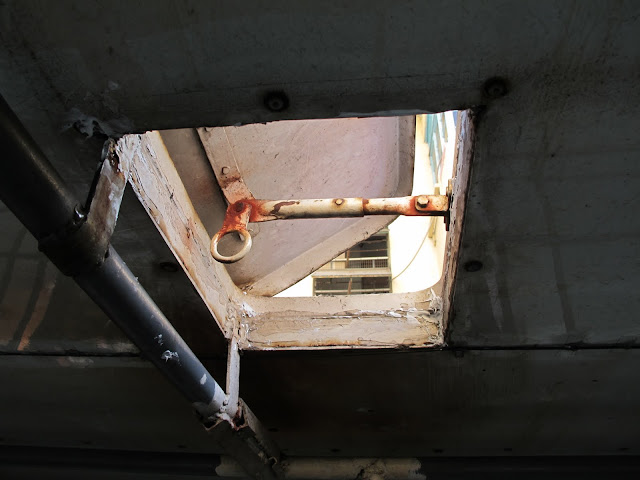 Windows on the roof can increase ventilation. 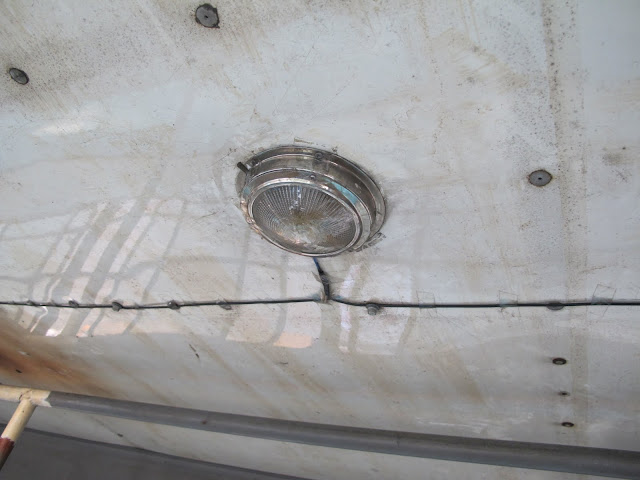 This lamp is the only illumination device in the entire passenger compartment. 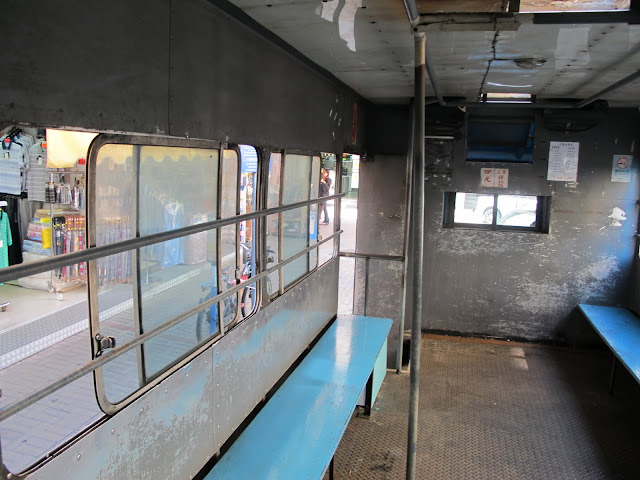 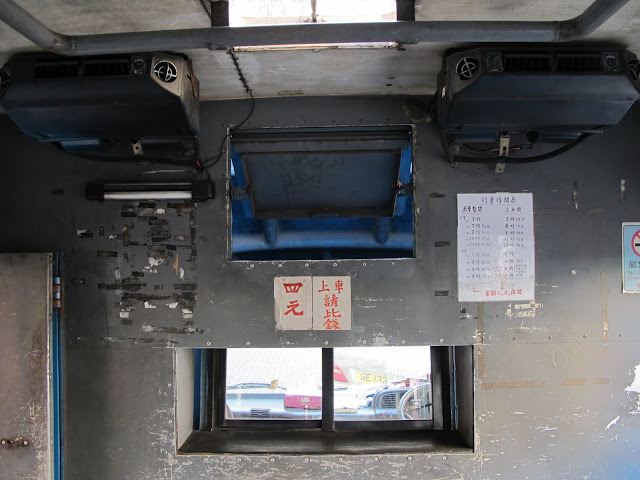 Here shows the fare of this route and also the time table. The fare, showed in Chinese, is HK$4 per passenger.

Don't be fooled by the two black boxes mounted on the roof. They are only fans, not air conditioners! Lorry buses are non-air-conditioned. 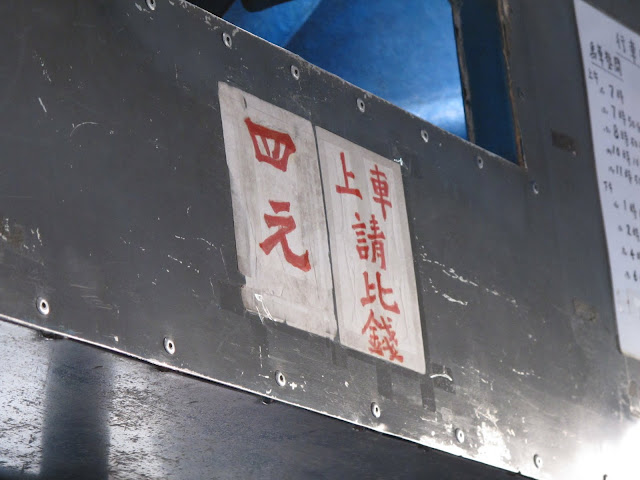 4 Dollar. Please pay the driver when aboard. 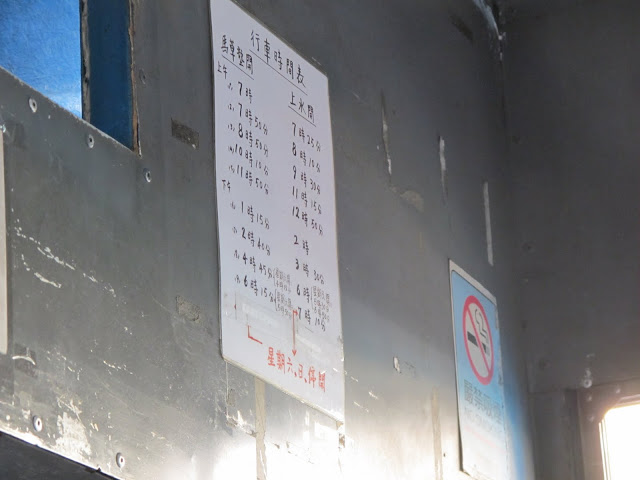 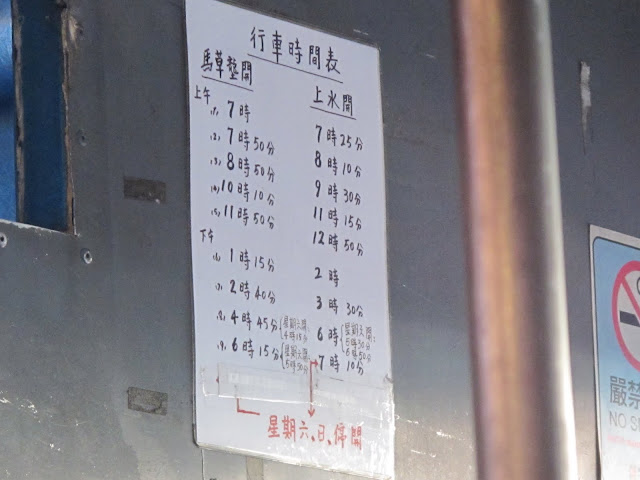 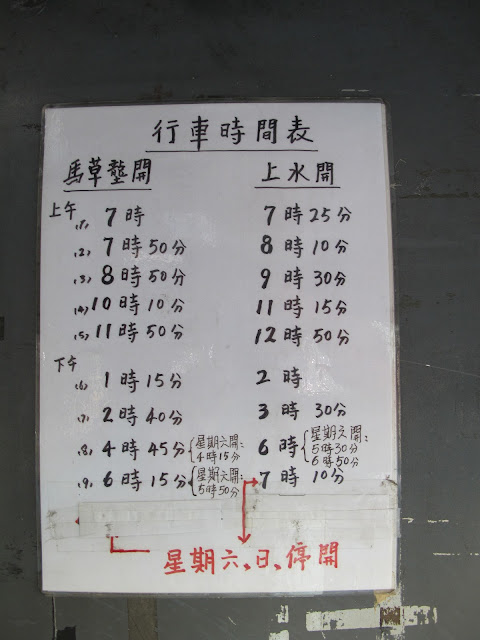 The route is operating at around one hour headway, with the last departure at 1910 from Sheung Shui on weekdays. After that, please take taxi. 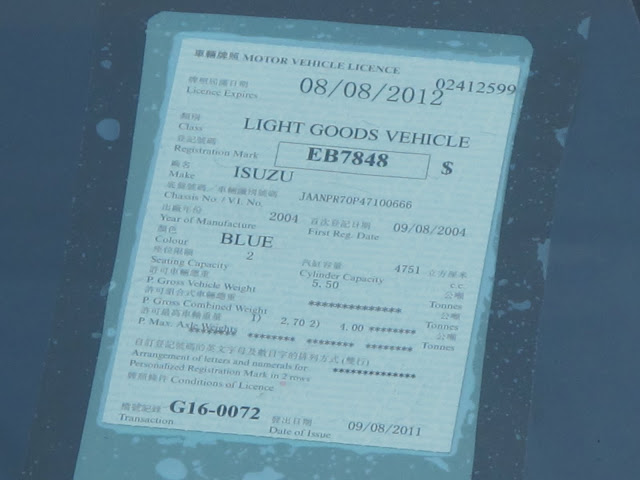 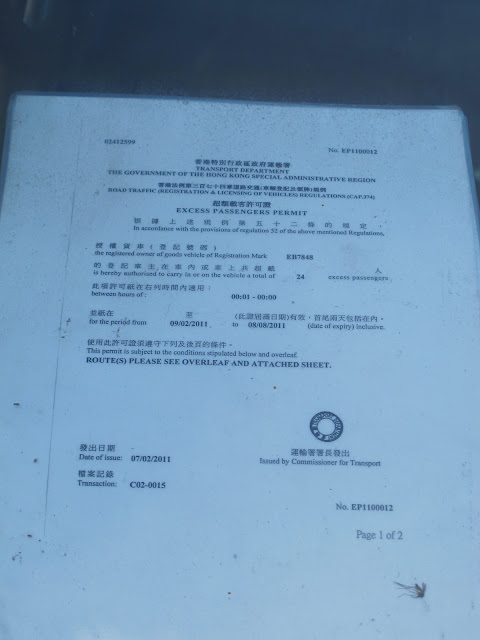 So how can it carry more passengers? The answer is this, Excess Passengers Permit. It permits this lorry bus to carry a total of 24 excess passengers. So including the 2 in ordinary seating capacity, the lorry bus can carry 26 passengers in total + 1 driver.

However, due to the policy of Transport Department, no new Excess Passengers Permit will be issued. And this permit is also not transferrable. Therefore, with the pass away of the operator, EB7848, the lorry, was also forced to retire.